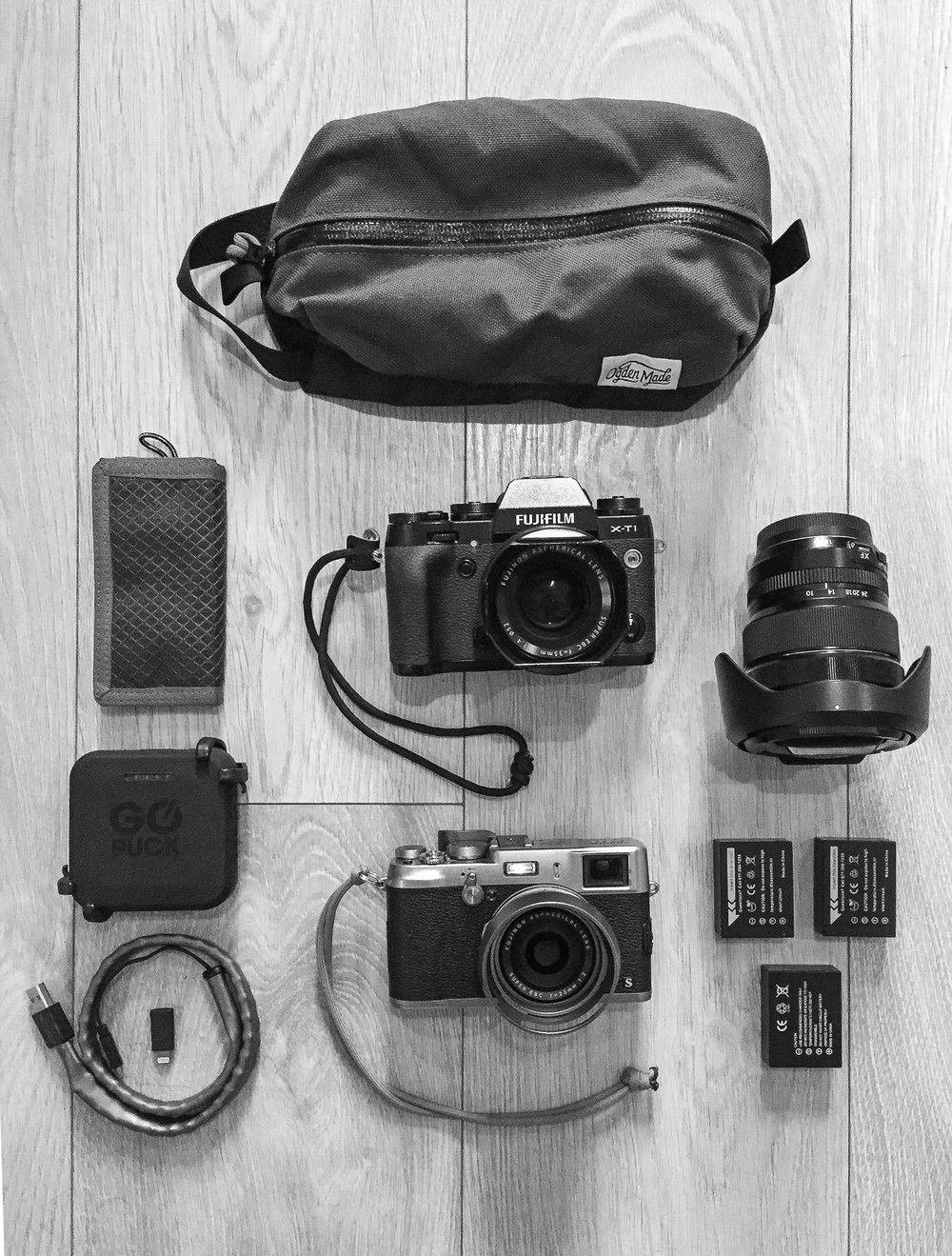 Today I set out to capture street scenes, a few environmental portraits and landscape photos in the town of Antibes, France near Cannes.
My main goal on this trip was to travel light, bring as little equipment as I could and still make some awesome photos. This means gearing up today with a small shoulder sling pack, two cameras, 2 lenses and a light assortment of accessories.  One of the reasons I made the switch to Fuji gear for this trip from Canon is simply put, the weight.  Canon images are phenomenal, the gear is however on order of scale 3-4x as heavy as the equivalent Fuji gear.

What I took with me really is irrelevant to what should coms first, and that’s a vision of what I’m going to capture. I set out with the gear in this post to capture images I already had envisioned in my head. Maybe not the exact scenario, angles or composition…but I had an idea of the visuals I was hoping to walk away with. The gear is the means to that end.  I evaluated my gear based on what I thought I needed.  If I hadn’t pre planned at least somewhat, my gear bag would have been as big as a checked bag!

Knowing what you want, prepares you for what you need to capture it.  If you’re not there yet as far as knowing what gear works with what scenarios, what lenses to bring etc…then review shots you’ve taken before, know the equipment you used and set out with that in mind.

To be honest, gear is secondary to any photographer’s vision. I have taken what I think are some AMAZING shots with just an iPhone. “Why? you ask would a professional photographer even consider an iPhone as a viable camera to capture amazing images? Because as a good friend and colleague popularized the phrase “The best camera is the one that’s with you!”. And it’s true.

You can only capture the vision you have with the camera you have. For some, that’s a pro level DSLR, for others it’s a Canon Rebel kit, and still other’s it’s a phone. If you spend some time around photography long enough, you’ll find most photographers could care less about their gear and care more about the “intent of the photograph” as David DuChemin puts it.

So here it is. My gear for the day. And a good many of the days on this three month assignment through Europe.

Accessories:
Think Tank Pixel Pocket Rocket Memory Card Wallet  – This card wallet helps me keep organized with cards that have been shot and those that have not.  It has enough slots to accommodate up to 20 cards comfortably.  On this trip I  have 15 SanDisk Ultra 32GB microSDHC cards.   Additionally, I leave all my photos on the cards and shoot to new ones even after the files have been downloaded.  As I’m traveling, I then have three backups.  One on the card, one imported to my laptop and a one on my backup drive that backs up the computer every nite.
GoPuck Portable Power – Previously detailed in this post previously.
Cord Cruncher – No tangles USB charger for my iPhone and GoPuck
USB Micro to Lightning adapter for iPhone which saves me on carrying two sets of cables.  I can actually charge my Fuji batteries with the Micro cable, and then later use that same cable to charge my iPhone.  I’m still not sure why Apple has not adopted a standard adapter, but this little accessory saves me on having to worry about the costly expense of replacing iPhone specific charge cords.
Wasabi Power Fuji XT-1 Batteries – At least two, this trip four.  I know I’m going to have a heavy shooting day today and with the Electronic Viewfinder of the XT-1 and X100s, they tend to burn through them.
Ogden Made Boxcar Bag – This small bag is about the size of a small loaf of bread.  I use it to carry some of the accessories here inside my shoulder sling.  It keeps the items separate from the secondary camera body in the sling bag.  Usually this is the X100s and I don’t use a lens cap on it, keeping separate the other items ensures no scratches to the lens.